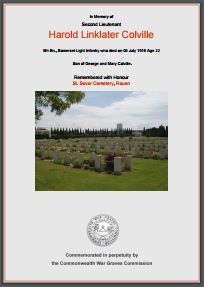 Today we remember Lt. Harold Linklater Colville who died on 6th July 1916 having been wounded at the Battle of the Somme.

The Colville family were shipping merchants and resided mainly in London. It is thought Harold was a friend of James Rigbye, Vicar of Fivehead and may have resided in the Village at some time.

Harold went to France in December 1915 with the 8th Battalion, Somerset Light Infantry. The 8th Bn were deployed on the Somme following the disastrous first day of battle which resulted in almost 60,000 casualties.

Lt Colville was injured and taken to a large clearing hospital near Rouen. He died of his wounds on 6th July 1916. He was just 22 years old.